This week at Experts Inside, we had our first VR team meeting. What may sound like fun (and indeed it was), was the kick-off of a series of serious collaboration experiments.

At Experts Inside Germany we have a daily standup meeting which we are currently doing with a Surface Hub in our meeting room. Team mates in the home office can join via Skype. The notes were taken in form of a sketch on the surface hub.
Even though it works fine there is still a lot of improvement possible.
For example, when you join from the home office the audio quality is often very bad. Or when you miss a meeting, the sketch gives you only limited information about what is really going on.

We decided the daily shall become our first VR meeting.

Our long-term business goal: Save travel time and costs and increase productivity at once.

This may sound like a paradox but can come true with the help of Virtual/Mixed Reality in the near future.

But why should a virtual reality meeting be better than a Skype or Teams meeting?
This is because of an effect known as “Social Presence” – virtual reality feels like being in the same place. I will not go deeper into this topic here. This would be way too much for this post. It is worth a blog post of its own or even a whole book.

One of the biggest challenges of VR is still: nobody has VR hardware!

So, we decided to buy the hardware ourselves, equip our employees and to lend it to our customers and partners.

Especially the Oculus Go is a great device for our scenario. It is a mobile, wireless, standalone VR device with a net price of around 185€ and is really easy to use.

One Oculus Go even pays off when you just can save one single business trip!

And I am only talking about the direct travel costs like flight, train or car. If you bring travel time to the table, you save a lot more even with the first meeting.

The first platform we have chosen to try for our daily VR meeting was AltspaceVR, which was acquired last year by Microsoft.

AltspaceVR is a free, social, virtual reality platform, where you can hang out with friends, listen to music, watch movies, play games, but on the other hand you can also have meetings, give speeches and deliver trainings.

The two most magic things of AltspaceVR are: a browser which is getting synced between the users in the same room and the browser supports loading of 3D plug-ins written with threejs or A-Frame. The other one is, the probably best cross platform support. AltspaceVR supports: Oculus, Oculus Go, HTC Vive, GearVR, Windows Mixed Reality, Windows standalone, Mac standalone, Leap Motion… I would say pretty much every VR device that is around.

Sounds great in theory, but does it really work? There is only one chance to find out – hands-on! Or rather glasses-on! Attendees from left to right and used hardware:

At the first meeting we needed a setup time from about 15 min. It took relatively long, because many of us tried the Oculus Go and AltspaceVR for the first time.
And at the moment the navigation of the Oculus Go in AltspaceVR has still some glitches. We’ve reported this issue already (thanks Sven).

I used a Windows Mixed Reality HMD via the SteamVR bridge on a Surface Book 2 15” with a GeForce 1060. Unfortunately the performance was rather bad. And my hardware specs were far better than the ones from an average business user.

We also didn’t take any meeting notes. Currently there isn't any good note board for AltspaceVR and writing notes with a keyboard in VR is rather challenging. For this reason, we have decided to take a video from our next VR meeting.

My current impression is, that is still a little bit too complicated for an average user to join a meeting without proper introduction/training.

In Summary, I was quite happy with our first daily VR meeting and I’m looking forward telling from the next... 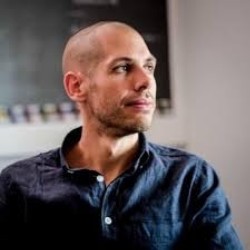 The future belongs to those who see possibilities before they become obvious.